"What do you want to hear from me? What haven't you heard before? I had a tough childhood, but prevailed. Became a relitively healthy little bastard by the time I was a teenager, though didn't graduate from high school... became a professional wrestler. You know the ironic twist in my story though? My father would have actually be proud of that last fact. Of all things, proud. I mean damn, I quit high school.

See, my father was a professional wrestler. I suppose that makes me second generation if he had ever done anything of signifigance. He was... a cult hero, at best. You know, talented high flying pioneer who never reached his full potential. Thing was he drank himself to death, though actually that's putting things lightly. Like a coward he killed my mother when she was protecting me, then commited suicide.

That's life. Or what shapes it, I suppose.

Tangent though, sorry. Became a pro. I became a pretty damn succesful wrestler those days, too, in the 90's. Succesful for what was expected for me atleast, a protege... high flyer like my father. Going by the name of the "Tin Angel" Chris Phoenix I signed a long-term with ACW, and even had dark matches in the CWL and CSWA. I'll get onto that subject of 'the more things change...' later, though. Though generally I was a right little prick those days, success got to my head, pushed me... in greed. Turned on friends, alienated management, left the woman I loved while she was preganent. Yes, it was my kid by the way... and yes Izzy is beautiful. It's only now that I realize this of course.

That and the unpredictablility of the past. But why am I here, with all those negatives, that negative shit of a high flyer... speaking to you as a respected and herelded vetran, a technician and fighter?

Well remember what I said about my greed, in those days? It wasn't just in the ring, but out. I was a well-rounded deadly sin, as the angel made of tin. I had gotten into gambling, sports gambling, be it college basketball, pro football... or even, get this, pro wrestling. I even bet on my own matches. Pulled a right fine Pete Rose there. Not to say that many people know about that though... Things went shit though with gambling, as they tend to with any sorts of odds, and I got put into a damn tight spot. Hindsight being 20/20, I probably shouldn't have figured out a way to bet on myself. Not to say I didn't have it coming though, if you believe in karma. The knee I meant, not the money I made on myself through the bankroll of dirtbags and loan sharks. Then lost.

My left knee was right fucked and a couple of ribs where broken. I probably would have died that day too, if not given a second chance from mob muscle that evidently had started wandering the earth months later because of some devine miracle. Not that he made it all that far before saving my ass from the fire, though, because we returned back to his old job, I suppose wandering the earth gives shit pay... and I was his new right hand, and then other half, as it was.

This was me in the dirty world now, with different rules from the real world, but shit... I shouldn't get into that, I've already rambled about myself for to long. You want any more information, you can track down a bio on the net, they've got anything on there. Otherwise... I'm going for a smoke. Yes, I smoke." -- Alias; when asked about his childhood and earlier years in the pro wrestling business, and why he had gone missing from '96-'02, returning as a hell of a changed man.

That was until his return to an old... almost forgotten home. All-Star Championship Wrestling...

Beat the bad guys… all while the dickhead former owner sprays gray on his dash and subsequently rotted in hell.

Which all adds up to? Original Pulp Hero… is the knight in shining armor. Twisted, ain’t it?

Television Champion? 84 days straight. Undefeated, on his own terms.

ACW Wrestler of the Spring... 100 day undefeated streak, in singles matches, from March till June 2003.

21st Century Wrestling? Another story for another day.

When your a man like Alias.... your past tracks you down so it can kick you in the ass.

Pounded and Fused II. What was supposed to put the rivalry on ice... only strengthened it.

Which all led to the true drama... between two friends.

I'll make sure to put everything together in much more detail in the near future... but let's just leave you with four more words.

Reality though, it doesn't have perfect endings... or perfect beginnings. All-Star Championship Wrestling came to an end in December of 2003, well for Alias atleast. Even with the biggest gain of momentum in the federation’s history, ACW no longer had enough steam to maintain a TV deal. Alias blamed Brian Carter. Carter didn’t listen. Alias then found himself in the same predicament as his father had years before… either stay with the federation that he had a hand in making, that was now sinking, or take the bait of a bigger federation and keep the momentum of his career going.

After weeks of fighting against the latter… Alias finally agreed to leave ACW. His mentor in the business for the last decade, Charles Dunn, even ended up signing his release papers. Rumor has it now, that ACW has taken to a traveling road show style of federation… touring all over the United States and into Europe to keep afloat. Hell, at least it went out with a "bang"... right?

For some reason though, Alias felt like less of a man then his father was in requards to ones loyalty. That fact ate him up inside.

Don't ask Alias about leaving this home of his, the federation that made him who he was today, because he won't talk about, it leaves a bad taste in his mouth... he'll give a quaint 'Fuck you'… dream of what could have been, what is now, and then change the subject. Ask him about the beginning, however, and he'll have one word for you.

Alias career in Action! had started off with a bang. His debut, on the 85th edition of Pressure Point, sent shockwaves across the wrestling world when he defeated Sharc, Action’s recently crowned Player, well… sort of. A few days later, and Alias was the central guest on the 24th, and seemingly last, edition of Whatever. The week after that he fought fist to nail with the ORIGINAL Action! Champion, Jeff Garvin, in what could only be a forerunner to what would happen between either man in the future. This all led to Action’s Christmas show, the PPV and New Years celebration in Las Vegas… and the day that changed Action!, making it a shell of what it once was, on the eve of Christmas eve.

Details are still shady… but it all stems from Reed Young’s evident and steady loss of power within A!W. Reed wanted to once again push such ‘wrestlers’ like Christopher Fox and LLB back into the spotlight, scuttling aside the resurgence the company had enjoyed with Jeff Garvin, KSZ and Max Danger, most notably, in the upper card. Reed had never been competent as an actual leading figure head for Action!... but he all but proved it when, in this dispute with the likes of EM Pleh and Joe Black, among others… the idiot king put them in the position to give him free reign on Action!… or walk.

… and your Pulp Hero.

Reed got nice and drunk, drowning the stupidity, and tore up each and every contract. Yeah it was official.


HOHOHO… Merry Christmas. 2003 had come to an end in a way that Alias could have never predicted. Not by a long shot.

Alias’s contract negotiations with WWC subsequently fell through, due to his participation in the mass exodus in Action!

It seems that when you get hit hard… and hit hard during the holidays, well, thoughts turn to home sweet home. The ringing in his ear and that shining gold, one way or another it had given him something to do. What is the real definition of a martyr anyway? Alias, as he says, was headed south for whatever awaited him there. If not for family, faith… or redemption…

Then hope. Something old school, as you knew it would be… that would be new to the world and a finally a fresh start for the Original Pulp Hero.

All things to happen since then... well, that's written history...

... and what's etched in stone and plated gold, are eight words.

Alias, the first Champion of the Squared Circle.

One of many firsts, actually.

He was Tyr. The bravest of the gods. The only one that didn't fear the Wolf. The reason... there was a Tuesday (Night of Wrestling, that is).

He even got to meet his daughter, Issabella Samuel, Izzy, for the first time. An event in itself that held another story for another time.

Still, Clash would be a match for the ages... one hundred and five days into the reign of the Original Pulp Hero, two months after one hell of a three-way match against Brandon Youngblood and Coral Avalon at Unprovoked.

It would be... Sonny Silver, the devil himself, who had gone through each of Alias's friends... Randalls, Rook, Frampton... even Monet... before he got to Alias.

And he got to Alias, oh yes, just when Alias got to him.

... and though it was a vicious cycle, he was still himself, amoungst the wars on three fronts that raged amoungst professional tragedy and personal triumph...

It was still Alias - Original Pulp Hero. So what if he was a little worse for wear?

Ecspecially for the spirit... 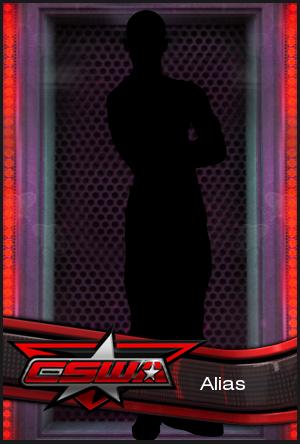