Blitz were formed in the late 1990s when Max, stuck in the United States after the company he worked for folded, met Jecht while working as bouncers. Max invited Jecht to train as a pro wrestler, the two making their debut as a team soon after. They dominated wherever they went, but due to Jecht's temper and Max's heavy Germanic accent, the two weren't given a chance to speak with the crowd.

This changed when one company asked their colour commentator, Leonard Johnson, to dust off his managerial skills. At first Leonard was sceptical, but as the weeks and months went by, Leonard realised this was the biggest chance of his career - that after all the people he'd managed, out of them all, this new team was the one that was going to make it.

It took several years and long, gruelling tours, but Blitz built up a massive reputation, even attracting interest from some large, globally-broadcast companies. They finally got offered a deal by fledgling US promotion, MCW, which gave them TV exposure in the United States, in 2003.

The company folded soon after, but not before Blitz had impressed the management at Empire Pro Wrestling, who offered them the chance to be part of another young company. The team were quickly pitted against other teams, powering through most opponents with ease on their way to, finally, capturing the Tag Team titles in a four-way elimination match which also featured the teams of Priest/Eizenkreuz, Cameron Cruise/Joey Melton, and champions Lindsay Troy/Christian Sands.

Blitz held the titles in Empire Pro for over a year, defeating all comers, whether in straight competition against another team or against 3 challenging teams made up of those in the company's TV Title Tournament. It wasn't until the arrival of the Highland Park Social Club and their convincing Dan Ryan to make their upcoming title match a 6 person match, with Leonard Johnson joining Max and Jecht in the ring, that someone finally wrested the titles from their grasp, with Slambo the Clown pinning Leonard.

The team continued unabated, determined to regain the titles. Some months later they were due to challenge the Cameron Cruise Project for the titles on Aggression - however, Joey Melton refused to attend the show, which led to interim GM Beast stripping the champions of the belts and awarding them to Blitz, who were then attacked by long-time returning rivals, the Chronic Collizion. In the aftermath, Leonard also refused to accept the second title reign, and always lists Blitz as one time EPW Tag Team Champions.

However, Dan Ryan, owner of EPW who was feuding with Beast and IrishRed at the time, reversed the decision at the next Aggression. Refusing to allow his charges to be pawns in what he saw as a petty squabble, Leonard Johnson took the microphone after a match, and after slamming all parties involved, led Blitz out of Empire Pro - with a quick stop to say "goodbye" to the Chronic Collizion.

Meanwhile, Blitz had joined A1E as part of a tag team invitational tournament. Having worked a short tournament previously in the newly reopened MCW (where they placed second, even defeating A1E tag team champions, Big Dog and Dan Ryan), Blitz made it to the semi-finals before losing out narrowly. Impressing Nathan Houston, they were offered permanent contracts, and set about immediately dominating the rest of the tag team roster, deliberately avoiding going straight after the champions because, as Leonard said, "The only way to prove you're truly the best is to beat everyone else and prove no-one else deserves the belts, before you beat the champions to a bloody pulp."

Their journey to the titles ultimately took them to a triple threat elimination match. Much like in EPW they were up against formidible opponents in the Second Coming and JA/Big Wreck, but Blitz took the titles forcibly, doing what they always did. They would hold the titles for almost a year, defeating teams from the HSPC and others, before interference from Marcus Wescott (Beast) gave his colleagues in the Age of Chaos the titles; as Leonard would boast afterwards, it always took three men to take the titles from Blitz.

The two looked to immediately rebound, but tragedy struck when Max suffered a catastrophic injury in Japan as part of a tour that Leonard had arranged. Unable to compete, Max's career looked in doubt, while Jecht returned to A1E to compete as a singles competitor. Now, nearly 4 years later, Max and Jecht have reunited, and are ready to show the world that the greatest threat isn't power or speed, but the pure unbridled combination known as Blitz. 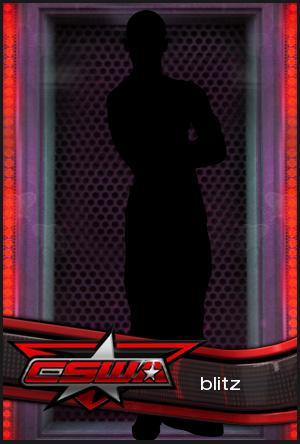