Born June 7, 1976 in Greensboro, Troy lost his mother due to complications following childbirth and was raised by his father, Jack, a history teacher and basketball coach. An excellent athlete through high school, Troy was All-State in both football and basketball, and earned a scholarship to Syracuse University, where he played four years of football and earned second-team All Big East his senior year.

But, if you were to ask anyone who knows him, they'd tell you that Troy's life changed completely when he was one of a only a handful of people to step into a converted warehouse in Greensboro in 1988 and see the beginnings of the CSWA. Though he loved every second of what he watched, and he watched a lot, the idea of a wrestling career never really occurred to him, though it may have always sat in the back of his mind.

A fourth round draft pick of the Philadelphia Eagles in 1998, Troy had a moderately successful rookie season before tragedy struck. During the last game of his first year, he suffered brutal knee and spinal injuries after getting caught on the infamous Vet Stadium AstroTurf. His football career was over before he could truly get it off the ground.

After kicking around the Delaware Valley for several months, rehabbing furiously even though he knew he'd never put on the helmet and pads again, Troy stumbled upon a wrestling career after a meeting with Jason Reed, a former star in America and Japan who had opened up a Philly-based training center. After months of training, Troy had finally gotten back into competitive shape and signed a short-term contract with EFW, a Philadelphia-area indy fed. He wrestled in indies across the country for two years before signing with GXW, but more injuries, this time a torn labrum in his right shoulder, prevented his career from gaining momentum.

However, he returned, until in February 2003, while touring in Scotland, he received the worst phone call of his life. His fiancee, Lauren Bennett, and his father, Jack, both staying at Troy's home in Greensboro, were shot and killed attempting to stop the home from being robbed in the middle of the night. It crushed Troy, who nearly committed suicide that night. He took time off to grieve, but returned once again, capturing the Xtreme Title for a second time before GXW closed it's doors and Troy started the next phase of his career, signing deals with both Empire Pro Wrestling and, fulfilling a dream, the CSWA.

He had success in both promotions, but in the summer of 2005 he seemingly walked away, never to return. Troy thought he no longer wanted to be the man that his life between the ropes turned him into. Being away so long had cost him the lives of the two people closest to him, and he wanted to return to a normal life. But, for a man like Troy Douglas, normal wasn't easy. Approaching his 30th birthday, he realized that in 6 years of wrestling, he'd never accomplished the one goal he'd set out for himself; winning a major world championship. So now, he returns, healthier than ever, more committed than ever. 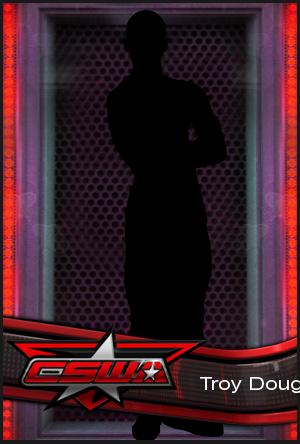