Twenty-eight year old Reagan Jones comes to CSWA after spending ten years as a Quarter Back for NFL newcomers Phoenix Knights. He’s quick, strong and has good agility. He has all the attributes to be a success in this game. As well, he’s not afraid to show his strength. If anyone has any doubt in Reagan’s Wrestling ability, pretty soon, they could be proved very wrong.

Born and raised in Phoenix, Arizona, there was little doubt Reagan would be a sportsman. His mother is a former Skeet champion and his grandfather represented USA in Wrestling at the London Olympics way back in 1948. Though he was unfortunate not to win a legendary Olympic Gold, he didn’t even get on the podium, but on his return to Arizona, he was treated as a hero and enjoyed celebrity status until he passed away in ‘97.

Reagan is engaged to the beautiful Ariel. Ariel comes from Lisbon, Portugal and is a very beautiful long dark haired, olive skinned, long legged, big boobed (all real!), tight assed cat. A former model and Miss Portugal, Ariel will turn heads, stiffen crotches, and be a sure-fire hit with the … faithful when she accompanies Reagan to ringside, wearing her favourite yellow polka-dot bikini!

Reagan is dedicated, determined. Everything he does, he must be perfect. It is almost certain Reagan will lose once or twice, and when he does, expect his passionate temper to boil.

Reagan has short brown spiky hair, thin blue eyes and fine stubble. He is a statue of power. He has a large tattoo of a phoenix bird on his right arm and left side of his chest. He also has an impressive six-pack. To wrestle, he wears white wristbands, white trunks with ‘The Imperial’ on the back in black fancy letters, white knee-pads and black knee-length boots. Out of the ring, he wears expensive clothes ie. anything made by Armani or Versace. When CSWA are holding an event in and around Phoenix, he will drive his cherry red '67 Ford Mustang to the venue. 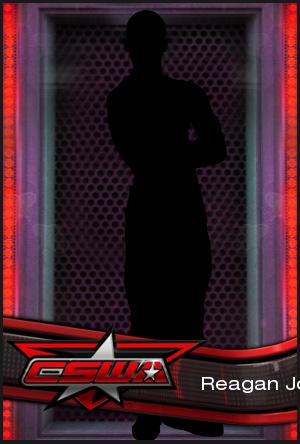