Manual "Manny" Juarez is one of the more diverse entertainers in CSWA History. A singer. A dancer. At one time a manger. Current ON TIME co-host with Juan Simons, and maybe most importantly the most crooked official of all-time.

Smuggled in the country by, well we're not sure how he got in the States but when we find out who let him in, they're dead. Once in America, Juarez wasted no time reaching for the stars, plotting his immediate run to the White House, and subsequent World Tour.

If Manual ever runs for office, he can kiss GUNS' vote goodbye. Well paid by Mark Windham, and Hornet to do their bidding in the Windham/GUNS EN World Heavyweight title match at WINTERS WARRIORS VII (March 1996), Juarez famously refused to count a beaten Windham out declaring he no longer spoke English and didn't understand GUNS' request. Obivously, Merritt and Thomas, with GUNS threatening to walk from the federation, fired Juarez.

After a number of deportations and an all-around checkered ref'ing past, amazingly Manny was brought back into the CSWA by winning an Internet fan poll. Back in, and graciously accepting any job opportunties, Juarez took the big leap. Many auditioned, many tried to bribe Merritt for the coveted (is that a stretch?)ON TIME spot, but Manual Juarez's session tapes bowled everyone over, with effortless ease he put everyone over, never uttering a bad word about anyone. But he was quick to cheerily examine how 'he would have reacted differently' in the same situation.

Manual has his sights set on a Spanish Language singing career. Cracking the entertainment business is a game of who you know, and a weekly gig in front of the cameras for ON TIME is bound to open two or three doors.

No one quite knows, least of all Juarez himself, if Manny can sing, but returning 'home' a singing hero has been a dream.

Does he have skills? Manny claims to have done uncredited work on a number of top 500 albums, as well being the creative genius behind Jewel's new album. Just don't ask for an autograph. The two, surprise, surprise had a nasty falling out. 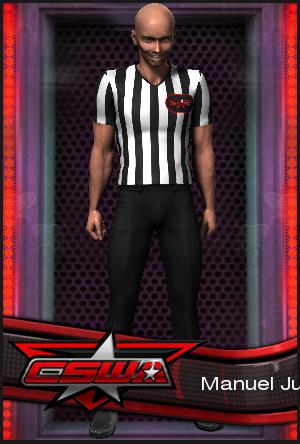