Robert Arnold Anders was born and raised in little Rome, Georgia. As far back as he can remember reaching the age of reason he can remember watching wrestling and more notably Rome's very own Arn Anderson. While most little kids spent their time cheering on professional wrestlers like Hulk Hogan preaching about "taking their vitamins and saying their prayers" Bobby was hooked onto the silently captivating and scarily charismatic 4 Horseman enforcer in the background week after week.

Bobby competed all throughout elementary, juinor high, and high school wrestling collecting countless acolades, metals, and trophies in amature wrestling tournaments all over the Southern States. No matter what he always managed to pay his respects to his idol. Upon graduating from high school in 1998, Bobby made the decision that he wanted to forgo college and go to wrestling school to be a professional wrestling. He actually received some of his training at the WCW Powerplant, it was there that his dream came true and he met his idol Arn Anderson. Sadly, Arn was long retired from wrestling by that time, but it didn't stop Double A from verbally teaching Bobby a sum of what he knows including the secret to Arn's patented trademark Spinebuster.

Bobby learned everything that he possibly could from the horseman legend soaking in all of the man's knowledge like a sponge. On numerous occasions Bobby was given the call to appear on WCW Television and on Nitro/Thunder as a member of the main roster, but Bobby actually declined and remained in the powerplant until it closed trying to learn all that he could. It was a good thing as in 2001 WCW closed its doors and was bought out by the WWE.

After the WCW close, Bobby toured on the indy scene gaining more experience and some notority under his belt, but it wasn't until after a year later that once again Fate would shine on Bobby once again. During a houseshow tour around Georgia, Arn Anderson would once again cross Bobby's path. Arn had agreed to do some small houseshow appearances on the same tour that Bobby was on. Arn agreed to work with Bobby in a small tour. Of course Arn couldn't actually wrestle his protege, but was in a program where Bobby played the heel and Arn was the face. Bobby (In the storyline) would turn on his hero and attack him. Then Arn (in storyline) would recruit someone to take on Bobby. Bobby loved the angle, but felt bad that he had to be against his idol, but in the end the feud was over and well received by the houseshow fans and thus got Bobby over in the South.

Bobby continued to wrestle in the Southern states touring gaining experience but never moving up. He felt that after his program with Double-A he had his brush with fame and that was that. He didn't need anything else. Besides he is only 26 years old and he had time. He is in no rush and was making a decent sized living on the houseshow circuit.

It wasn't until a representative/Road Agent of the CSWA was given a tape of the Arn Anderson/Bobby Karma houseshow feud. The Representative was so impressed that he immediately showed the tape to Chad Merritt and the board of directors to see about getting young Bobby Karma signed before some other federation snatches him up from them.

When Bobby received the call the CSWA, he was beyond thrilled, but felt that he needed a little help so he asked his friend Freddie Meriweather to accompany him as Bobby's manager since if it wasn't for Freddie, Bobby wouldn't be there. So now here they are trying to go beyond their brief 15 minutes of fame. What role will fate play in Bobby Karma's life from here.

The individual that sent Bobby's tape of him and Arn Anderson into the CSWA was none other than Bobby's best friend and touring partner Freddie Meriweather who felt that his friend's skills were being wasted on the houseshow seen, but Freddie had gotten a call from Arn saying that time was passing Bobby by and he needed to get his big break soon or else it would be too late. 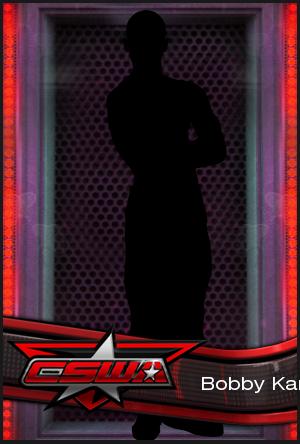