"But what she's going to do next?"
"Whatever she wants, Buckley. WHATEVER SHE WANTS."
-CSWA ANNIVERSARY 2001

The Princess of Wrestling. The Queen Bee(atch).

Joey Melton's younger sister has been, since 1993, the CSWA's most prized trophy. The birth to the Melton's mother that began her descent into madness, Teri is eleven years Joey's junior. Given up for adoption a month after being brought home, it's fair to say Teri and Joey knew nothing of the other for years. Raised by wealthy New Jerseyians, Teri was given life on a silver platter. With her stunning good looks, and sweet-as-pie disposition, Melton had her adopted parents, and the world, in her hand from her first birthday.

After graduating James Monroe High School with Honors, Teri couldn't choose between Ivy League colleges. Something was missing from her life. The truth about her past.

Teri, with the help of her parents, located her brother in the summer of 1993. CSWA Wrestling superstar Joey Melton.

Nearly broken by anxiety attacks before approaching Joey, Teri was relieved to find Melton geniunely moved by her gesture. Having run from his own past, and having struggled to become a self-made man (who married into wealth as a sixteen year-old), Joey more than welcomed the opportunity to get to know his sister. The younger sister he barely remembered having.

Working a summer tour to bond with Melton, Teri made sproadic appearances as "Lucy" Melton. In 1994, on holiday break from school, Teri returned to the CSWA and started part-time work as Melton's manager. But with two major additions to her credit. 38DD breasts that earned her billing as "Miss Hooters."

Teri, er, Miss Hooters was an immediate hit. Ratings soared. Crowds roared. And the boys in the back fell fast, and hard.

Impossibly more charming than Joey, Teri won the hearts of whomever she wanted. The line was long to court Melton, but moved fast.

In the mid-90s, Teri made headlines with two high profile marriage proposals. One in March of '96 at WINTERS WARRIORS VII from CSWA VP Robert Schmid. Teri, took the show to think it over, but emphatically turned Schmid down, who was later pooped and fired from the company that night. The other, in 1998 to "The Muppet Kid" Timmy Windham. This one, the right one, was accepted. Tragically, the marriage was never to be, as Windham was believed to have been killed in a massive explosion to FISH FUND PARK.

Devasted by the loss of her lover, the innocent, charming Melton dissolved, and Teri gave birth to a new, hardened personality.

Turning on her own brother in a cage match, Teri distanced herself from Joey, and his shadow. Business and pleasure never mix, and the Melton's professionally parted ways. No one knows for sure if their attempt at reconcilation has lasted.

For the last seven years, Teri's become the most successful manager in the CSWA. Seeing the CORPORATION, Tsunami, Wildstar, and Dawn Of A New Day, among others to greatness.

A ruthless businesswoman who took a D off her chest at a grab for respect, stunned the wrestling world by agreeing to be used as a pawn in Chad Merritt's war against Hornet. While in a break from his great love, Poison Ivy, Hornet emmersed himself in a series of one night stands with Melton.

The result, a shocking pregnacy that destroyed the superstable the CLAIMSTAKERS (Eli, Hornet, and Randalls.) and Hornet's relationship with Ivy. The pregnacy was a sham. A glorious ratings winner that gave Teri a blank check to do what she wanted in the league.

Proclaimed by PEOPLE magazine and fan boys everyone to be one of the most beautiful people in the world, Melton turns down business offers hourly. Her appearance fees astronomical, no sane promotion would hire her. No backstage could survive it. Painted by Ivy as a bitch who's set feminism and the woman's role in the industry back by fifty years, Teri's hobby is overseeing the destruction of Poison Ivy. A homely woman she despises for her superior business sense, and overactive jealous tendancies.

Working on her schedule (as does the CSWA), Teri's goals of Global Domination and the submission of every male is enslaved to the weather, and sales in Times Square.

Only the CSWA has her.

But keep dreaming. One day, maybe you will. 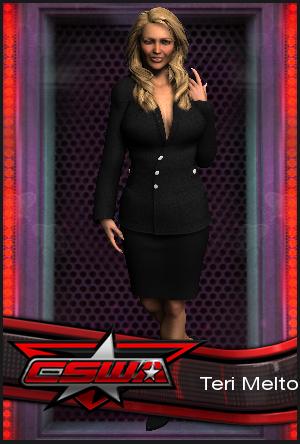