:::Excerpt from the pages of a Wrestling Historian files on Minion
real name unknown::::

Minion began is simple career as a crazed fan of the legendary original Minion. Details are sketchy but he says he stalked him and forced him to train him. The details get even murkier after that as this second Minion has said that he was abused by Tom Parker (not sexually) but that his training methods were a little bit on the rough side, often leading to this Minion being a frequent attendent at the emergency room (which can be documented), this has many believing Minions was cause inadverntly by Tom Parker.It didn't help matters when Tom Parker was killed in a tragic car accident. This Minion made his shocking debut by calling out every single one of Tom Parkers enemies and single handly defeating all of them, but he was not done there. His second goal was to hurt people as much as he could...over the course of his career he became more pyschotic and at time laughing as his opponent lay at his feet bleed to death or suffering some sort of horrific injury.He has been known to kidnap people to get his way and even at times blackmailing or chumming up to an individual in order to get what he wants at the end of the day. He cared little for his body as he went for high risk high out come type moves and even practiced new unorthodox moves that would often confuse his opponents. Championship gold often elluded this superstar which many believe (as well as this historian) lead to his eventual departure from the sport. Then one day he actually left...no one knows why for sure (see previous comment on lack of championship calibur matches)...no one knows why he left New York and moved to the west coast, but he put himself in self exile. What version will appear next is unknown..it could be a pyscho...it could be the sadistic...or maybe something new...perhaps a nicer friendlier Minion one who is sorry for his past crimes against his victims. Whatever Minion does show up he will make sure to put on a show for all his cow like fans.

:::end of excerpt from the Wrestling Historian on Minion
real name unknown:::

Though Minion has an evil past i have thought about tinkering with the idea of making him an anti hero...but i can go all out and be evil...depends on what you want Chad and email me back on it. Also i would like it to be a surprise...any thoughts on how to do this...i think i could make a new account just for the first round match...i like shock value. 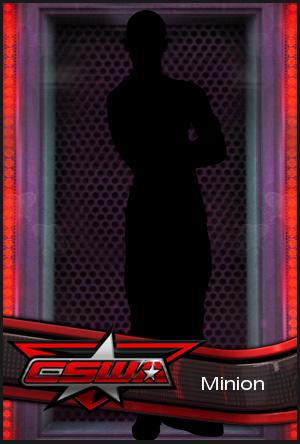