Nova comes from a federation you've never heard of, battling (and honestly overcoming, for the most part) foes you've never heard of, winning belts that mean nothing to you and garnering fame that isn't applicable here in the land of the C-S-Dub. "Shit," you might be thinking to yourself, "with that kind of intro, why the balls should I give a good goddamn about this joker?"

Because he's an e-human being, you asshole, with e-feelings just like everyone else. Okay, I take back the "asshole" part...I'm not trying to come off too strong. Perhaps a different approach...a list of things Nova likes that might make you see that really, he isn't much different from you, or I, or that goofball Mike Seaver up the street who's ALWAYS chasing the ladies!

Don't you like those things? Shouldn't you root for Nova to become the next CSWA Something Champion? And if you're competing against him, shouldn't you maybe take it easy and let the poor bastard get his hands on a strap? He's doomed in NFW, and one out of two would still rock. HARD.

* This is made even more sweet by the fact that if opponents attempt to block Bourbon for Breakfast by going down to their knees, it sets Nova up for the Caesarian Section. Oh, yeah. OH. YEAH.

- I swear to God, the day I see this actually sold, I'll shit myself. Nova had an in-ring injury at the hands of Brandon Youngblood (long story), and as a result, DOES NOT ATTEMPT A SHOOTING STAR PRESS ANY LONGER. Somehow these bad boys keep popping up in his matches. Go figure.

- Nova is divorced, and his ex-wife has custody of their daughter. The estrangement from both of them is a constant source of misery for him. Despite this, he is normally a jovial presence wherever he is. 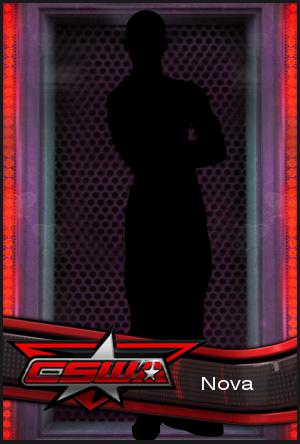