Jason Payne's fascination with wrestling began at an early age. When he was 5, his mother would take him to his grandparents house every Saturday. His grandfather, an avid wrestling fan until his death at the age of 62, would watch the locally broadcasted Memphis based wrestling promotions religously, and almost demanded his young grandson watch it as well. Payne was instnatly hooked.

Even after his grandfather's passing, Payne immersed himself even more into professional wrestling. He memorized every move, every hold, every personality, every facet of the wrestling industry was tucked away into his brain. Tucking this knowledge away safely, he knew one day that this would be his true calling.

At the age of 18 he walked through the doors of the Basham-Schultz Wrestling Academy. Dave "The Bear" Schultz, a legend in Southern wrestling took the young Payne under his wing, and Payne learned the basics of the "Dirty South" style of wrestling. Payne was a born natural having spent years watching and imitating the performers he saw on television. Schultz saw nothing but bright things for Payne and after a few months of training, began booking Payne on his weekly show. Payne made his debut under a mask as "The Intern", a heel doctor wannabe that used a loaded doctor's bag to finish off opponents. Payne spent most of his time as "The Intern" putting over Schultz's more established workers.

During the first few weeks of working, Payne met another young up and comer, Chris McMillan. Like Payne, McMillan had also grown up watching professional wrestling from his hometown in Colorado. McMillan and Payne formed an instant partnership out of the ring, since they both shared a love for professional wrestling. It wasn't long before they were paired in the ring. Payne as "The Intern", and McMillan, who was also under a hood, as the "Texas Hangman". Though they were used primarily for putting over the more seasoned talent. However over the weeks, their fluidity as a tag-team beagn to catch Dave's attention. Giving them the freedom to come up with their own gimmick, McMillan and Payne deciding they wanted to keep protraying themselves as heels, came up with a tried and true gimmick designed to get them the most heat. Passing themselves off as dishonorably discharged service members, they began attacking the fan's beloved heroes every week. Calling themselves "The Dogs of War", and going under their real names, McMillan and Payne made their way eventually to the top of the tag team ranks.

They wrestled around the south and a venture up to the northeast for a few years working with various promoters, but never really getting their big break. After a few years of doing this, Payne was at his end. Broke and tired of the hungry life on the road, fiction becamse real life as he actually entered the armed forces. Enlisting in the Navy, it seemed Payne had a bright future ahead of him as an aircraft mechanic. But despite all that, he carried with him his bitter attitude of having not succeeded at prowrestling, and one afternoon it cost him as his anger boiled over and he struck an officer. His entire world crashing down around him, he summarily dishonarably discharged from the Navy. Returning to his Kentucky hometown, he got himself booked onto several small independent shows.

Going back to the world of wrestling was pretty much the only option that Payne felt that he had. Seeing as he could not get any other job with his tarnished military record, the life of the indy wrestler beckoned and he embraced it fully. Driving to a different town every night, sometimes working for as little as ten dollars for a show. One day, while working the northeast territories, he saw a televised wrestling event for a promotion called New Frontier Wrestling. One of the wrestlers featured on that show was none other than Payne's old tag team partner, Chris McMillan. Chris and Jason had not spoken in the few years that Jason had joined the Navy. Payne was intrigued at the thought of working with Chris again, and got in contact with the NFW office. He was given a tryout and booked for a couple of shows to showcase his talents. Satisfied with his abilities, NFW signed him on full time.

Payne immediately established a rivalry with McMillan, who had established himself as an upper mid-carder face with the company. Their rivalry waged across the northeast before culminating in a Dog Collar match at the NFW PPV "Futureshock". After a long and brutal match which saw both performers get busted open, Jason Payne scored the win with outside interference from DC Stratton. McMillan and Payne continued to fued off and on thoughout the following months. Then in the fall/winter of 2003, Payne and McMillan reunited in ACF and GLCW under the old Dogs of War banner. DoW managed to win the ACF Tag titles, but failed to grab the GLCW straps though they had several shots at the gold. Within months, GLCW was no more and ACF underwent a name change to NAWA. Payne was able to capture the NAWA Hardcore title, and was involved in a bitter rivalry with one of the NAWA announcers over that title when that promotion went under in the winter of 2003.

During this time, NFW underwent a complete overhaul and announced it plans to hold a tournament for the grandest prize, the Ultratitle. Payne and McMillan put aside tagging and put their names in the tournament. Payne started out very slowly in the tournament, losing four straight matches. Some were beginning to question Payne'a ability, or perhaps his schedule, since he was working with ACF/NAWA and GLCW during this period. McMillan on the other hand was very successful early on in the tournmanet before succumbing to injury. However prior to that, fate intervened and the Dogs of War found themselves once again booked in a rematch from Futureshock. A Dog Collar Match. It was make or break time for Payne as he was dead last in the points race and needed a win if he wanted to have any hope of making an impact in the tournament.

Like the previous encounter, this one was a brutal, bloody slugfest. There was no outside interference like last time. These two men tore into one another with a fury not seldom seen in the sport. During the match, Payne went to the top rope to finish McMillan off. However McMillan pulled Payne off the top rope and Payne's neck snapped as the chain came taunt against his neck. Motionless on the floor, McMillian rolled Payne back in the ring for the easy win. Payne suddenly came to life, though it was clear something was terribly wrong with him. Fighting back from the brink of paralysis, Payne was able to edge out McMillan in one of the gutsiest shows of athleticsm ever seen in NFW.

After that match, Payne's injuries kept him out of action for six months. His return has been teased in NFW, and he has shown up Empire Pro Wrestling, New Era of Wrestling, and the Ultimate Wrestling Corporation.. Payne now stands at a pivital crossroads of his career. This is his second chance. What can he make of it?

Signature Move: Anesthesia - This Cobra Clutch variation can be used as an alternate finisher if an opponent is physically unable to be put through the Payne Killer. Payne has also been seen using a supplex variation pinning combination with this move as well in lieu of the Payne Killer. 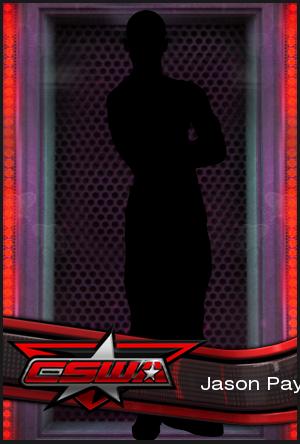