Boogie wears black jeans and usually a t-shirt or a black wife beater. As for his personality, he is tired of being held back and held down to the establishment or the man. (The suits in the CSWA.) He has been in a tag team for most of his career and now it's time for him come up on his own. He is a hothead and a recovering weed addict. He gets pissed off at almost everything. And when he is calm…that’s when he is the most dangerous. He’s toured all over the globe, knows all about extreme style and is mainly a powerhouse. He grew up in Calio Projects in New Orleans and moved to NYC in his youth. There he met up with a local promoter who was impressed with his size and ability. He trained Boogie, paired him up with a cocky and sometimes clueless partner, Disco Inferno, and they formed the Disco Express. Not long after competing in the indy circuit (SWA), they were soon called up by the CSWA to come in and add some depth to the tag team division. They quickly rose to fame and eventually dropped the disco moniker in favor one more true to themselves...Hip Hop.

Since embarking on a solo career, Boogie has turned a lot of heads. We was ranked Number 1 by FWI magazine for a greater part of 2003 and was the only man in GXW to hold all three major singles titles (TV, Continental, Unified World). His progress was put on hold due to the hiatus of GXW and his suspension from EPW. Boogie intends to pick up where he left off and become a dominant force in the sport of wrestling.

After leaving the sport for a few years, he ran his own local promotion. He came out of "retirement" in 2012 to compete in the Ultratitle tournament. Boogie still hungers for success in the CSWA and is prepared to do that at whatever costs in order to cement his legacy with the company.

In his first match back, at Versus 01, Boogie revealed a new tag team partner in the form of Malcolm Joseph-Jones. The tag team known as The Urban Legends was born, promising to wreak havoc on the CSWA and capture the World tag team titles, with the plan to defend them 3 times in order for each to get a UNIFIED World title match.

Boogie went solo in GXW and had a very successful career there. He won the Unified World title while still holding the Continental title there; thus being the last man to hold both championships for the organization. 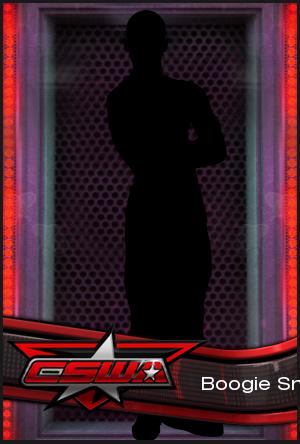