Needs to be completed

One of the most enigmatic superstars in the CSWA's history. Troy initially began his career as the silent, younger cousin of CSWA legend Mark Windham. Influenced by a combination of the nightlife atmosphere that attracts young wrestlers, rock culture and trying to escape the large shadow cast by his cousin, Troy took on the persona of "The King of the Slackers"-- a lazy, Gen-X wrestler intent on rising up the ranks of the world of professional wrestling by doing as little as possible.

Troy gained a lot of success and publicity for this stage of his career, especially drawing the ire of the veterans in the CSWA locker room-- Mark, Hornet, Mike Randalls, etc.-- who complained about Troy letting his vast physical talent go to waste. Troy was also hated by the CSWA's traditional fanbase.

A number of problems-- chemical dependency issues, injuries, the lure of Hollywood-- put Troy on the shelf for a few months. But on his full-time return to pro wrestling, he was met with open arms and welcomed by the fans and soon became one of the most popular personalities in the sport. This sent a shockwave to wrestling promoters throughout the country, who realized why this was-- the fan base had grown younger, these younger fans had seen Troy on MTV or in movies or hosting various FOX network specials, they enjoyed his rebellious/anti-hero ways. Troy took advantage of his popularity, signing contracts with many national wrestling organizations which soon made him perhaps the sport's biggest star.

During this time, Troy won the CSWA World Title, defeating the much-dispised GUNS, THE STRONGEST ARMS IN THE WORLD in San Antonio, TX. Reluctantly counting the pinfall on GUNS was Hornet, his longtime rival who could not defeat GUNS during their career-defining grudge match. The match had heavy symbolism for CSWA fans-- in order to save the league from the man who was trying to destroy it from within, it's eldest statesman had to recognize that the biggest star from a new generation of fans was needed to carry on the league's torch.

The second-half of Windham's career has been marked by feuds and alliances with three men: Mark Windham, Eli Flair and Eddy Love. Mark and Troy, having only done battle a few times, have never completely settled their differences. It was revealed to Troy that Mark was actually his older brother-- a dark family secret that only caused more resentment by Troy for Mark, feeling that he would never eclipse his older sibling's fame and would never be seen as his own man (although that's something he would never say).

His feud with Eli Flair came during Troy's early days, as both entered the CSWA at roughly the same time. Troy tried to, time and time again, rid the sport of one of the most violent and toughest wrestlers of all-time. The two have done battle several times in recent years. The most notable came during Eli Flair's first CSWA World Championship reign, when a returning Troy Windham-- who claimed to have never lost the title-- came to reclaim his title, but was put down and defeated by his arch-nemesis.

Soon after, Troy formed an alliance with the equally-controversial young superstar Eddy Love, who in his short CSWA tenure had managed to become perhaps its biggest star. Calling themselves "Playboys, Inc.," the duo united to do battle against the unholy alliance known as The ClaimStakers-- Eli Flair, Hornet and Mike Randalls. Much of the year 2000 was spent in various matches between the two.

Because of the Claimstakers vs. Playboys feud, Troy and Eli once again did battle. The two met in a great series of matches, the most famous being two of the most brutally violent matches in wrestling history-- the first being an enclosed steel cage match at Elvis Lives that saw the two brawl all over the arena, resulting in a massive amount of blood and carnage. That led to a much-awaited grudge match months later at Anniversary 2001, called The Rage In The Cage. In that match, Eddy Love threw in the towel for his long-time friend, giving Eli Flair a victory that he earned after damaging Troy's neck and breaking multiple bones in The Boy Troy's hands, sending him to the hospital for months. 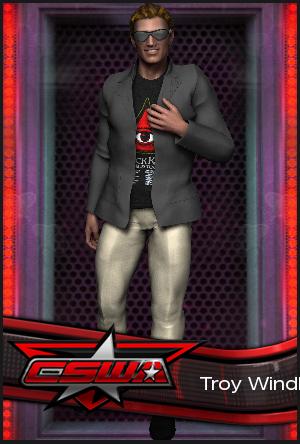